When David* recognized his former Orthodontist while vacationing on a tropical island in 2010, he decided to confront him about his treatment as a child.

“Do you remember me?” he asked.  The orthodontist shook his head.  David smiled and pointed to his teeth.

“Oh, I suppose you’re a former patient,” said the orthodontist.

“Yes.  Do you notice anything about my teeth?” David asked.  The orthodontist shook his head.

“They’ve returned to how they were before.  You really should change your treatment method.”

Like many orthodontic patients, David had started with a minor case of crowding as a child.  His orthodontist removed four premolar teeth and subsequently applied fixed braces to close the gaps and align the teeth.  Shortly after their removal, his remaining teeth relapsed.  After enduring two years of his life in braces, thousands of dollars had gone toward a still-crooked smile, now with missing teeth.

Extraction of teeth is a common practice in the dental industry.  According to Orthodontist Chris Norton, over 60% of traditional orthodontic cases in the U.S. and over 80% in the U.K. involve extracting between four and eight permanent teeth. Removing teeth and straightening them into alignment may at first appear to be a simple and effective method of correcting teeth.  With myriad problems resulting from extraction treatment, however, one must question whether this method is an easy way out for the practitioner rather than an optimal solution for the patient.  In the short term extraction is hard on the body, with trauma to the surrounding tissue, use of anesthesia, and potential for complications such as bleeding and dry sockets.   Beyond these immediate issues, extracting teeth and closing the gaps narrows the dental arch, allowing less room for the tongue and potentially reducing the volume of the posterior airway.  The approach can lead to long-term conditions such as sleep apnea, and even damage the facial structure.  A narrow arch provides less bony support for the face, sometimes leading to a dished-in appearance from the side as well as a narrower facial structure and smile.

The difference between extraction and non-extraction treatment is exemplified by a paper published by Dr. H.L. Eirew in the British Dental Journal in 1976.  Two identical twin girls had presented with identical cases of crowded teeth. 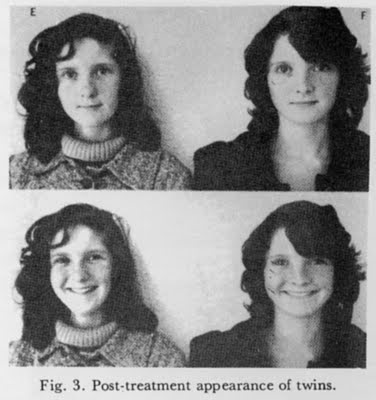 One received extraction treatment, while the other had her palate expanded.  The resulting differences are nothing short of profound.

For many years, orthodontists have practiced with the belief that we have evolved to have smaller jaws that are unable to accommodate all 32 teeth. Looking at the history of malocclusion, however, it becomes apparent that the rise of crooked teeth is closely paralleled with the rapid rise of civilization – something that has only taken off in the last four hundred years; a relative blink of an eye with the process of evolution taking millions of years.  This amount of time is simply too short for our genes to have changed significantly.  As such, it seems that crooked teeth are not a result of genetically smaller jaws but rather a developmental effect of our modern lifestyles.

Once we accept that narrow jaws and malocclusion are environmental rather than genetic, the focus of orthodontic treatment necessarily changes from the easy route of extracting teeth to the optimal solution of expanding the jaw to accommodate the teeth.

What About Wisdom Teeth?

Janet’s* story demonstrates how the dental industry can be overly extraction-happy.  She’s one of the lucky ones, with a wide dental arch and enough room to accommodate all 32 teeth.  Her wisdoms grew in straight without issue, and yet every six months at her dental check-up she receives the same advice from her dentist: “You might as well get your wisdom teeth removed; you don’t need them.”

Even if we were to accept the common “wisdom” that wisdom teeth are vestigial structures, it is alarming to think about the prevalence of wisdom tooth extraction.  After all, we do not have our appendix removed unless it causes us problems.  Why, then, do nearly 85% of adults go through the trauma of surgery for teeth that frequently remain dormant in the bone, or even erupt fully with no issue?  There appears to be a degree of fear mongering, with experts advising patients that problems like decay, infection or cysts will most likely flare up in time.  However, figures cited by organizations with a vested interest in promoting oral surgery are rarely backed by evidence.  In fact, when asked by the New York Times to back up its claim that 80% of young adults who retained wisdom teeth developed problems within seven years, The American Association of Oral and Maxillofacial Surgeons could not produce supporting evidence and deleted the statement from their website.  Critics of routine extraction cite many studies, among them one that found complications occurred for only 12% of 1,756 middle-aged people who did not have their wisdom teeth removed.

Perhaps many of us get along fine without our wisdom teeth, but are we really in optimal condition without them?  It’s certainly a thought to chew on.

Want to fight unnecessary extraction and help save the wisdom teeth of the world?  Click here to donate to our research fund and receive a free T-shirt with a donation of $30 or more.

or
Please check your e-mail for a link to activate your account.